The Girl On Fire

I've been a bad girl about updating since D*C, still so much to do as far as cleaning my sewing room and putting away my costumes. Anyway, I hadn't posted much about the Girl On Fire dress during the build. This dress was technically a replacement costume since I couldn't finish White Witch, and most of the work was tedious, uninteresting and repetative work on the hem. But here's a picture of the actual dress for those unfamiliar with the movie: 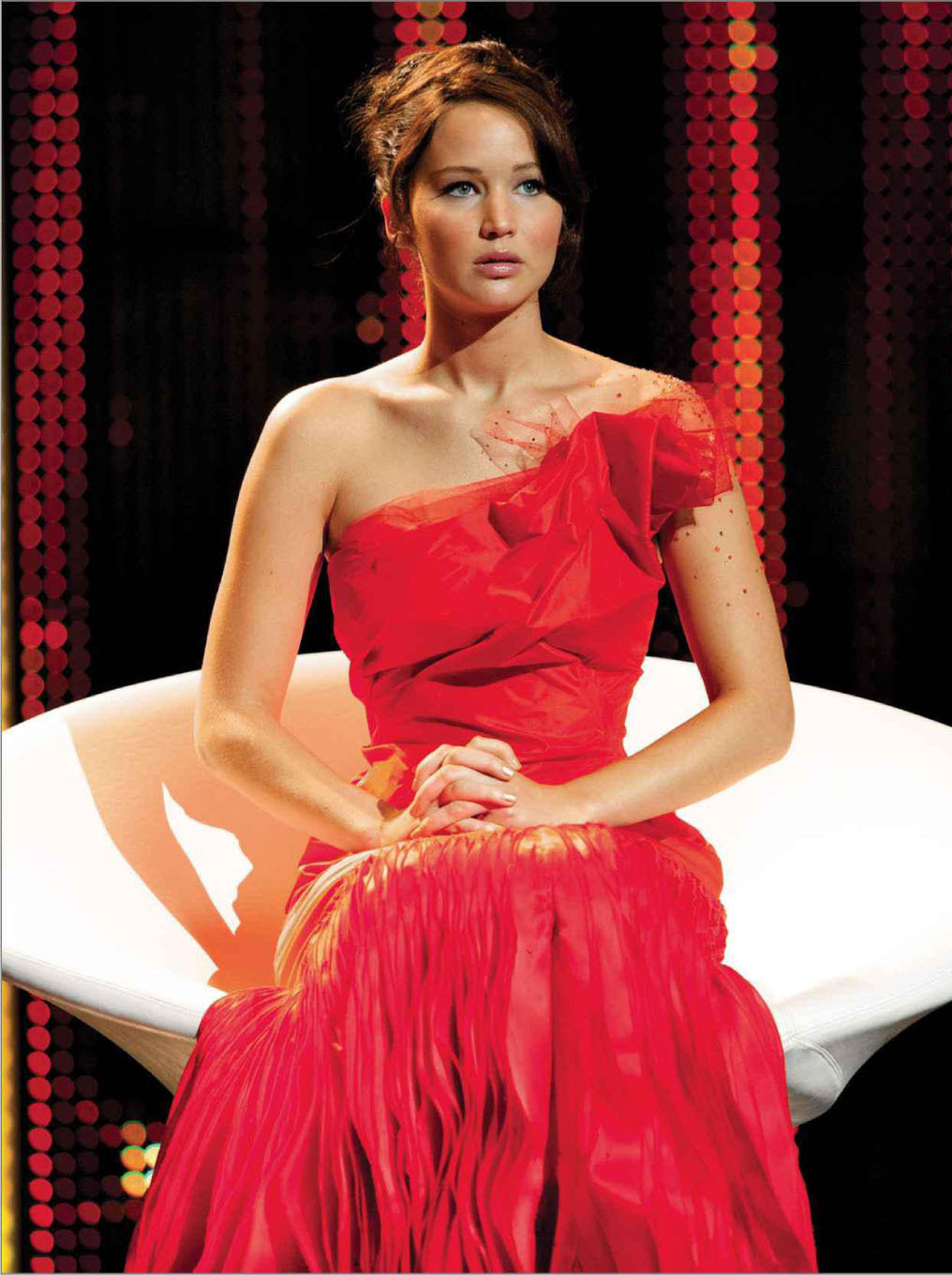 What I loved about the Hunger Games trilogy was costumes played a huge role. The description of the dress in the movie had it nearly completely covered in gemstones. Judianna Makovsky designed the movie costumes. I know a lot of people were disappointed in the movie version of the costume, but I LOVE the top, and I love what the hem does. I completely agree with the costume designers decision to make the dress more couture, because covering it in rhinestones would have made it look like, in her words, an ice-skating costume. Here's my version: 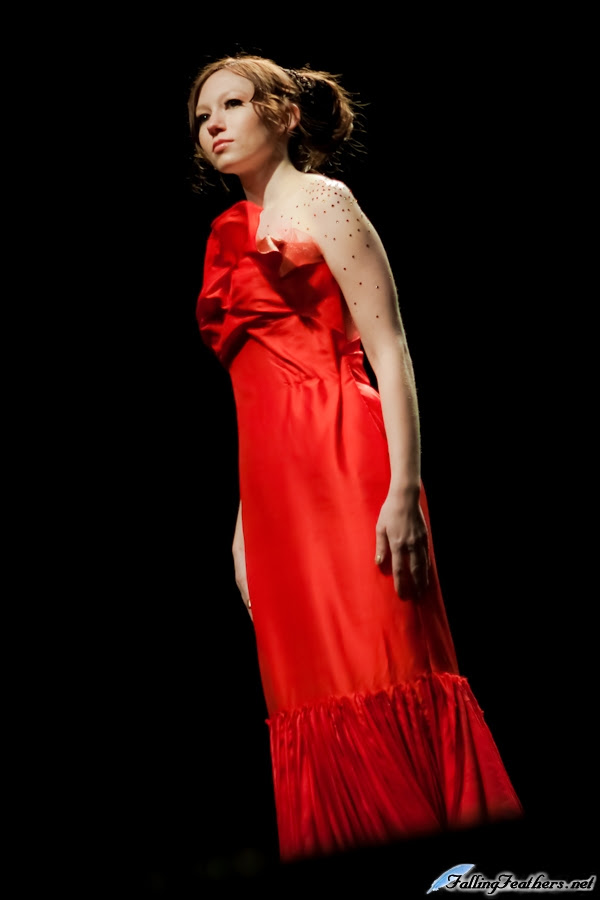 (Picture taken by Angelwing of FallingFeathers.net)
More behind the cut!!

I started with the understructure of the dress. I didn't take any pics unfortunately. I took some twill and drafted a fitted dress, which was boned to keep it up. I still need to make adjustments, I still have problems making self-supporting dresses without slipping down or gaping, but I'm hoping a waist tape and more padding will fix this. It made it difficult to bone it more than the front because the back of the dress slopes down on the right side all the way to the waist on the left side. There is red tulle draped in the back, which I backed with 4 layers of nude tulle. The dress was described as taffeta and organza in the guidebook that came out, but no organza I found was as sheer as what was in the pictures, so I used tulle instead. I did the hem before I did the body, but once the hem was done, I draped the top of the dress over the understructure. I had lined the body with gold iridescent organza so there was a peek-a-boo of color if you saw the inside of the flame draping at the neckline. There's also a bit of tulle in the front and a few randomly placed Swarovski crystals.

The skirt hem ended up being 9 yards of 55" wide silk satin, which I dyed. I used nearly every bit of that 9 yards, I even had to order extra because I miscalculated. I based my design of the hem on two pictures and a spinning gif image. The guidebook described the hem in one section as pleats, and another section as inserts. After weeks/months of staring at the damn pictures, I determined the shape of the pieces in the hem were a sort of petal shape. I made two full petal shapes plus two halves. Placing them together on the wrong sides, I roll-hemmed these pieces together and pressed the full pieces in half, into pleats, if you will, and then inserted them into the dress. I put a bunch of Swarovski rhinestones in them, but I underestimated how many I'd need, so I'll be adding more. When I was making this, I wasn't even sure it was going to spin like I wanted. I had a fear that the skirt bottom would be too heavy and it would just swish around. I finished the hem (but not the dress top) the night before I left for D*C and only then did I know it would spin how I wanted. 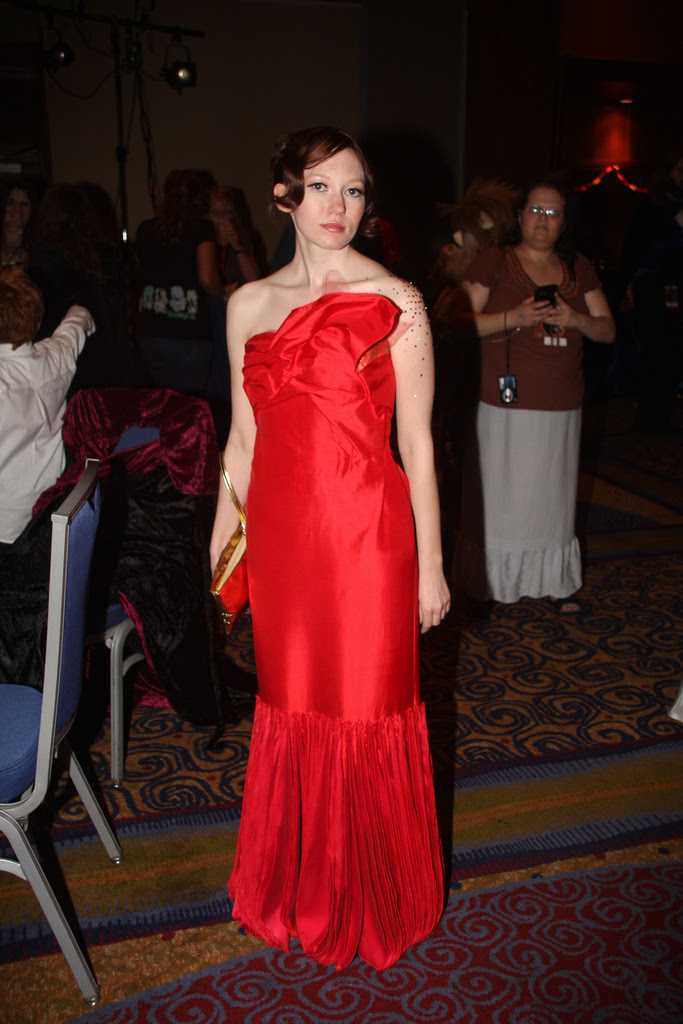 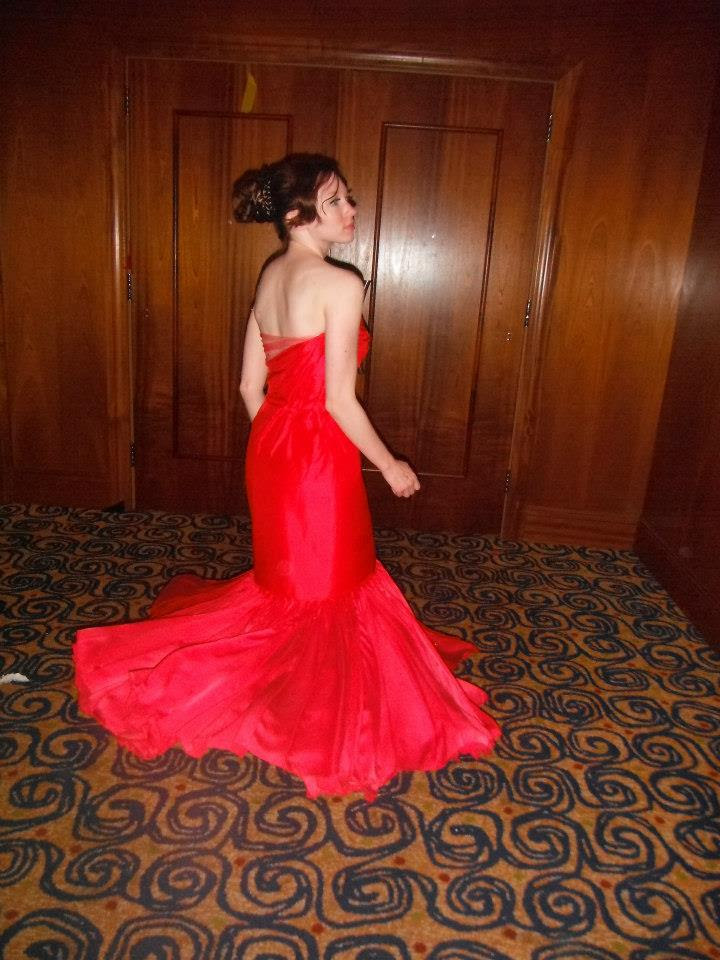 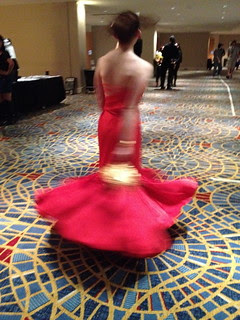 Photos by Maggie... I love the twirling one, it's fun!

I still can't believe how perfect the hair came out. Now I did have my hair dyed, and it wasn't quite her color, but as close as we could come. I started by pre-curling my hair with the Topstyler, just like in the movies. I made a high ponytail and added a large piece of false hair looped on a band to the underside and made just a loop, and kind of pinned the top of the tail up on the head. I had taken some of that fake hair and made 4 4-strand braids on a band (I put that on before making the loop) and circles those around the crown of my head, and it turned out perfect!

And finally, Ve Neill who did the make up released the exact shades of make-up she used, so in addition to fake lashes I used the 3 MAC shadows and 2 lip glosses that were used in the movie. I glued Swarovski crystals to my arm one-by-one with spirit gum and it took over an hour and a half each time. Both before the Friday Night Costume Contest, and the Yule Ball, I had to run out to get in line and ended up glueing more on in line!

Here's a video my friend Matt took of the spinning of the dress at the costume contest:


That point where I hesitate in the beginning was because someone in the audience yelled "DO IT!" When I got up there, hehe... otherwise I was PLANNING on spinning when they were done talking. Oh well. I don't know if this sparkled much at all because the video is grainy, but adding more sparkle later.

And... I won Best In Professionals!! I've never received more than an Honorable Mention in this contest before! The next day I was asked to attend a "Meet The Winners of the Costume Contest" panel. After the panel, I was told by one of the judges (Cheralyn Lambeth I believe) that she worked on the Hunger Games costumes, and the way I constructed the dress was spot on! I was GUESSING when I made it! That makes me unbeliebably thrilled. So there you have it! I love how this dress came out and it was a lot of fun to wear... and I kept getting asked to twirl, which was fun ;)
Posted by Verdaera at 8:24 AM