I know I've been a bad girl about updating pictures but I haven't felt like toiling away at the computer lately. I do have a couple of great photos from Bryan Humphrey (http://bryanhumphrey.zenfolio.com/about.html) I don't have any of the back yet because, well, I'm not happy with the back yet (I have a LOT I need to fix on this, but I'm sick of looking at it for now). I am wearing it again at a local con called Archon, I'm going to make a point to get some plain background pictures from all angles of this so I can submit them for the Rebel Legion. I also will do a write-up on how I did the hairpiece!

Sorry in advance for the watermarks, I've had a few friends recently have their pictures stolen, so better safe than sorry I guess... 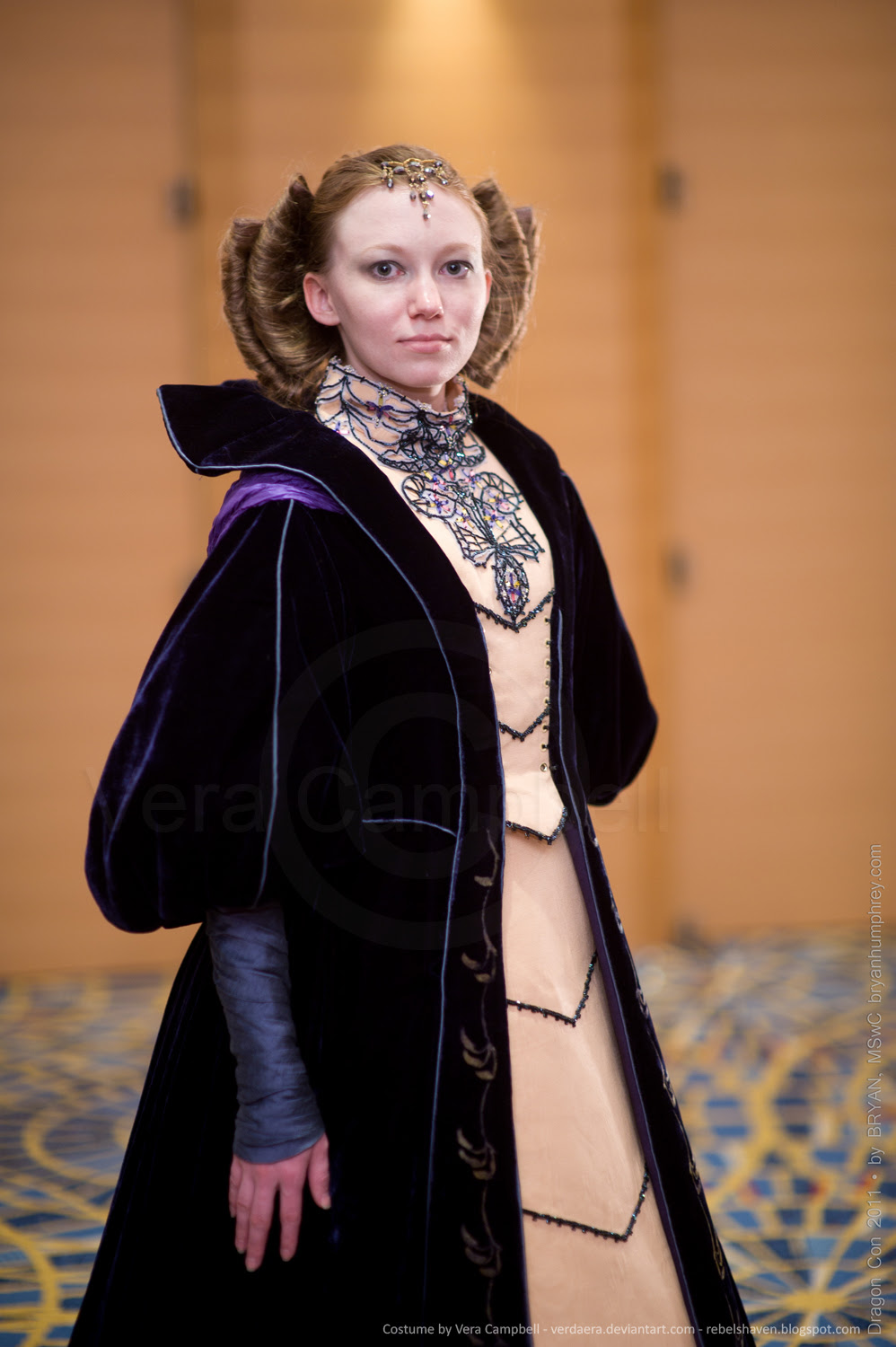 I'm still gathering pictures from this latest Dragon*Con and I'll hopefully have some full Padme shots up soon. Here's something fun I was lucky enough to be a part of, there was a Harry Potter Final Battle photoshoot. Here's a preview shot you can actually make me out in (Ravenclaw for the win!) 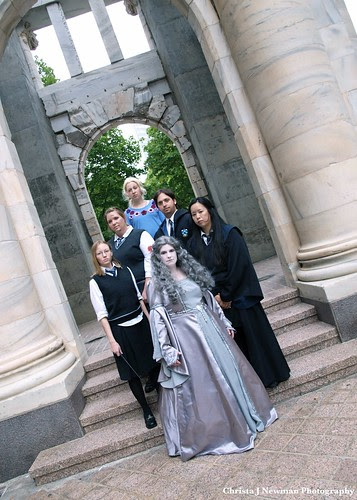 Here's a link to the photographer's Flickr (Photos by Christa Newman) of that shoot! I didn't want to bloody my whole outfit, it's hard to tell but I did get a little bit dirtied up for it.
Posted by Verdaera at 10:02 AM 1 comment:

Sooo, yeeeeeeah, I'm an idiot. I gave myself another project. To be finished in a week.

Here in St. Louis, we have a pirate fest for 3 weekends in September. I've never bothered to make anything specifically for it, mostly because I never budgetted for historical shoes nor have I figured out the hair. I've been wearing my crappy ren faire garb that's 7 years old and has freakin POLY BONING in it. It was in such bad shape I decided to at least whip up a new bodice. Then I started agonizing over the fact that it's still a horrible outfit. Then I remembered Maggie at Costumer's Guide managed to make an 18th century jacket out of one yard of fabric and thought, well hell! I can do that! (Thanks Maggie ;) ) 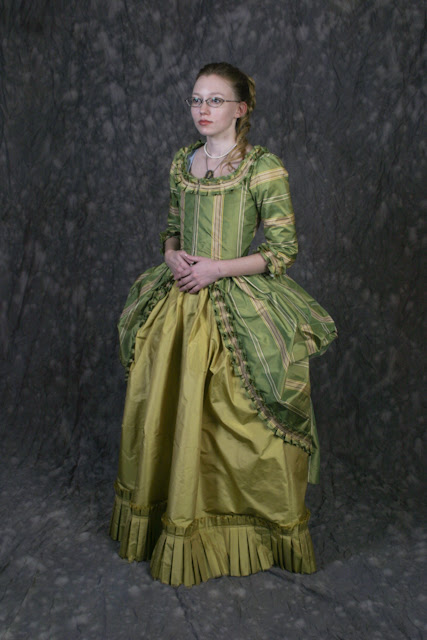 It wasn't perfect, a little bright. I simply took the bodice pattern for the above dress and altered it a bit. I decided to make the jacket boned and will try to forgo a corset (the one I made is fully boned with steel bones. Yeah, I can't drive in that) The box pleated hem on the petticoat, which was pinked and took foreeeeeeeever to pleat, got completely shredded at D*Con 2009 and that year's pirate fest, plus I had to wear tennies. I'm going to re-pink the trim and raise it to ankle height to show off my gorgeous American Duchess shoes (which will hopefully stay clean). The jacket will have a button front stomacher with brass buttons. I don't know what if any trim I'll add. I have to trim out my hat a little, and make a cap so I don't have to fuss with hair. Hopefully it won't be too hard to do all that by Friday night :) Sorry for the rambling post, I do that when I post late at night ;) Here's what I have so far. Things are just pinned on now. I have NO clue if any of this is period accurate, but it's good enough for pirate fest. 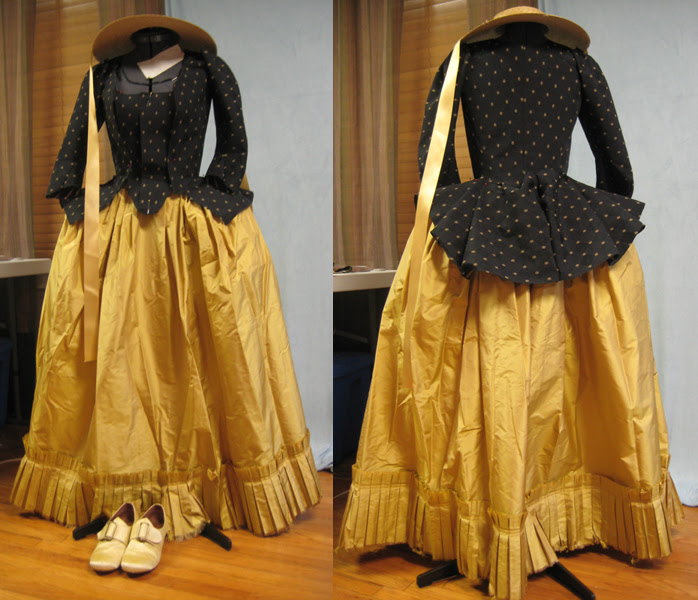 I returned from Dragon*Con safe and sound! It was a blast (though I missed bumping into a few people... argh!). The week leading up to D*C was hell, I caught a bad cold the weekend before, work was crazy, I was working every spare minute on my costume, and I was still beading on the Friday morning before I put it on. All in all, I got the Padme wearable and it got a very positive reaction. I'm not satisfied with how cutting out the beading from the poly georgette came out, and the hair I thought was rather fuzzy and not as neat as I'd have liked, but people kept asking if it was my real hair! So I guess it's good enough. I'll have pictures up of my 4 costumes as I get them in, edited and uploaded, but all in all it went well (except with my new Alice wig I kept getting mistaken for Claudia from Interview with the Vampire... which means I'd like to find a new one... and may one day make a Claudia costume *g*) Here's a quick pic of the finished product, here's me and Ashley Eckstein, the voice of Ahsoka Tano in the Clone Wars cartoon, and also the founder of HerUniverse.com, which makes Star Wars/SyFy gear exclusively for women :) 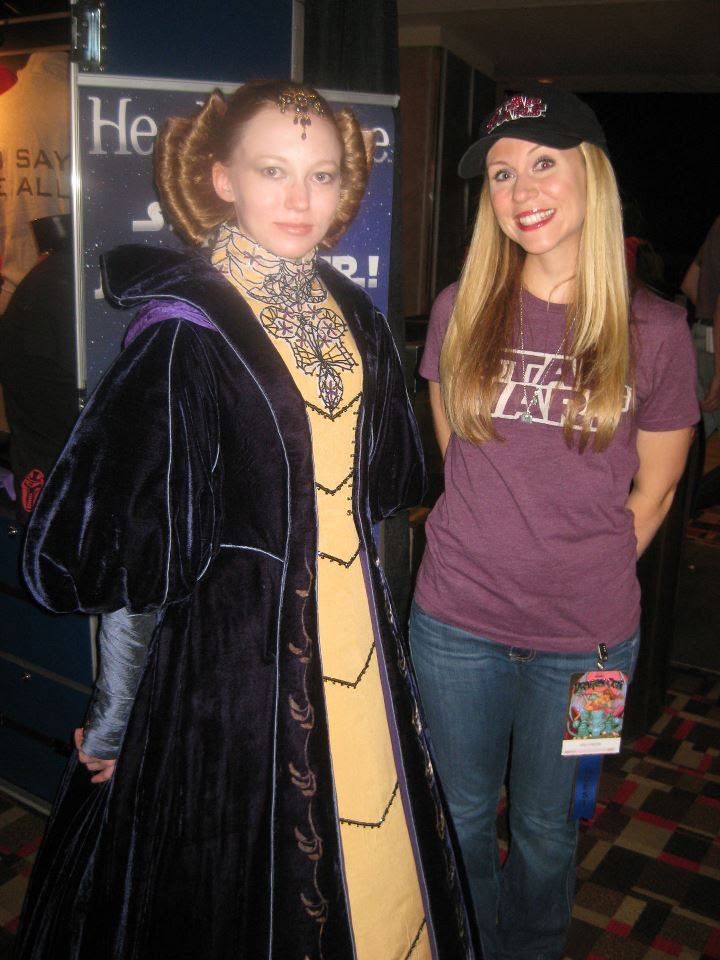 For the Padme, I now know what I have to fix. I need to do some tweaking on the hook closures, I'd like to add a petticoat layer or something to make the skirt larger, clean up the beading application, and do the drape and appliques proper since I just whipped up a temporary solution. I'm giving myself a week break from working on this costume as I'm sick of it for the moment, and I've started sample work on my Hobbit and White Witch costumes for this next year! 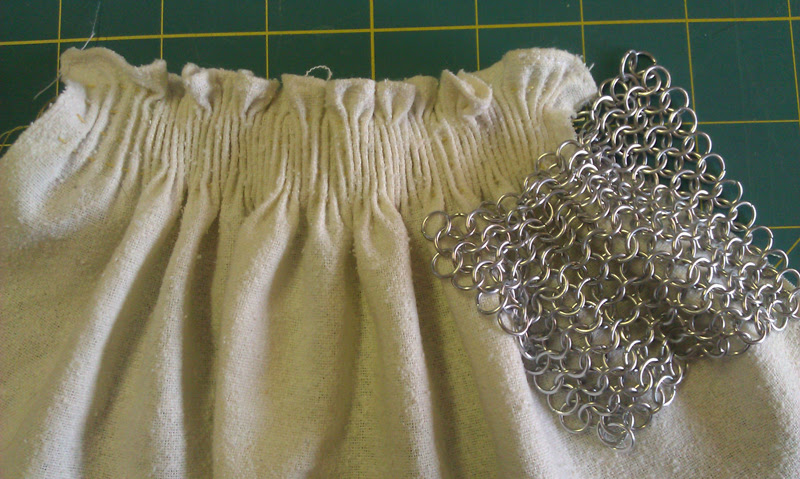 This is the smocking sample for the Hobbit chemise that will be made of raw silk, I have to stitch in the design to see if it will work, then I have to pattern it. The chainmaille is a sample of store bought rings and I will be ordering them in bulk online. I bought 5 yards of med-gray linen for the underdress for the White Witch from Narnia, which will be the only actual sewing required for this costume! Hopefully with the amount of hand work required for this costume I'll be able to throw in some active sewing projects such as my hobbit pieces and the Alice ribbon dress (and later, Padme meadow dress). Looking forward to a new costuming year :)
Posted by Verdaera at 3:51 PM 4 comments: