I've already posted about these costumes, but... the pictures for the Hunger Games Auction have come out, the first real sharp, clear pictures I've seen of a lot of the outfits, and I couldn't resist doing a little side-by-side comparison of my best two! I never got pictures of my arena or reaping one, and the hunting one only has a found jacket. I plan to make her hunting jacket whenever I can afford the leather. 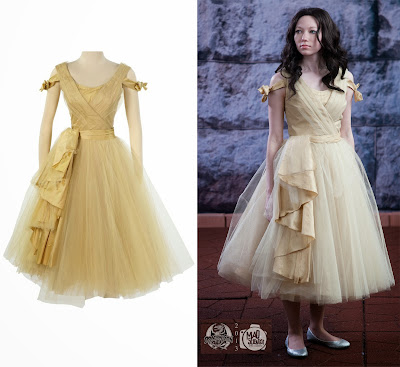 And this one isn't as close, since I made it with only two pictures for reference, but I still love it (I almost like my draped top better, much more sculpture). I'm slowly adding lots of crystals in the hem every time I get the chance to wear it. 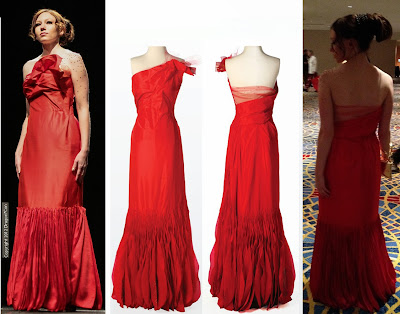 Also, I was made Fangirl of the Day on Her Universe October 1st, and a few days later I was Fan of the Week on the Official Hunger Games facebook page with this dress! It made over 17,000 'likes' which was super exciting. I was told many times they mistook this for Jennifer Lawrence... and just as many said I looked like Foxface! (it's the damn pastiness and lack of eyebrow coloring ;) )
I'll never be able to afford any of the auction items, but it's nice to see so many pictures. Now, on to Catching Fire costumes!