The Full Costume: So I finally got to model a weird thing

Last winter I tried to get my Katniss Cowl done in time for the last snow of the season so I could go do a photoshoot in the woods, but every snow we had after that didn't stick, but it's just as well since I finally found pants in the right color and got myself a new wig for Katniss. I taught myself how to ventilate wig lace so I was able to add a widow's peak to my wig to hide mine and I no longer have my own hair peeking out. I love this wig so much, but I have to learn how to totally replace the lace now because most wigs come with dark lace and I'm pasty. In either case, I'm really happy with how this whole look came out. I'm still trying to find a used brown leather jacket so I can make one that's closer to screen accurate. Here's the full costume from Dragon*Con 2014.

Photos by the amazing Bryan Humphrey :) 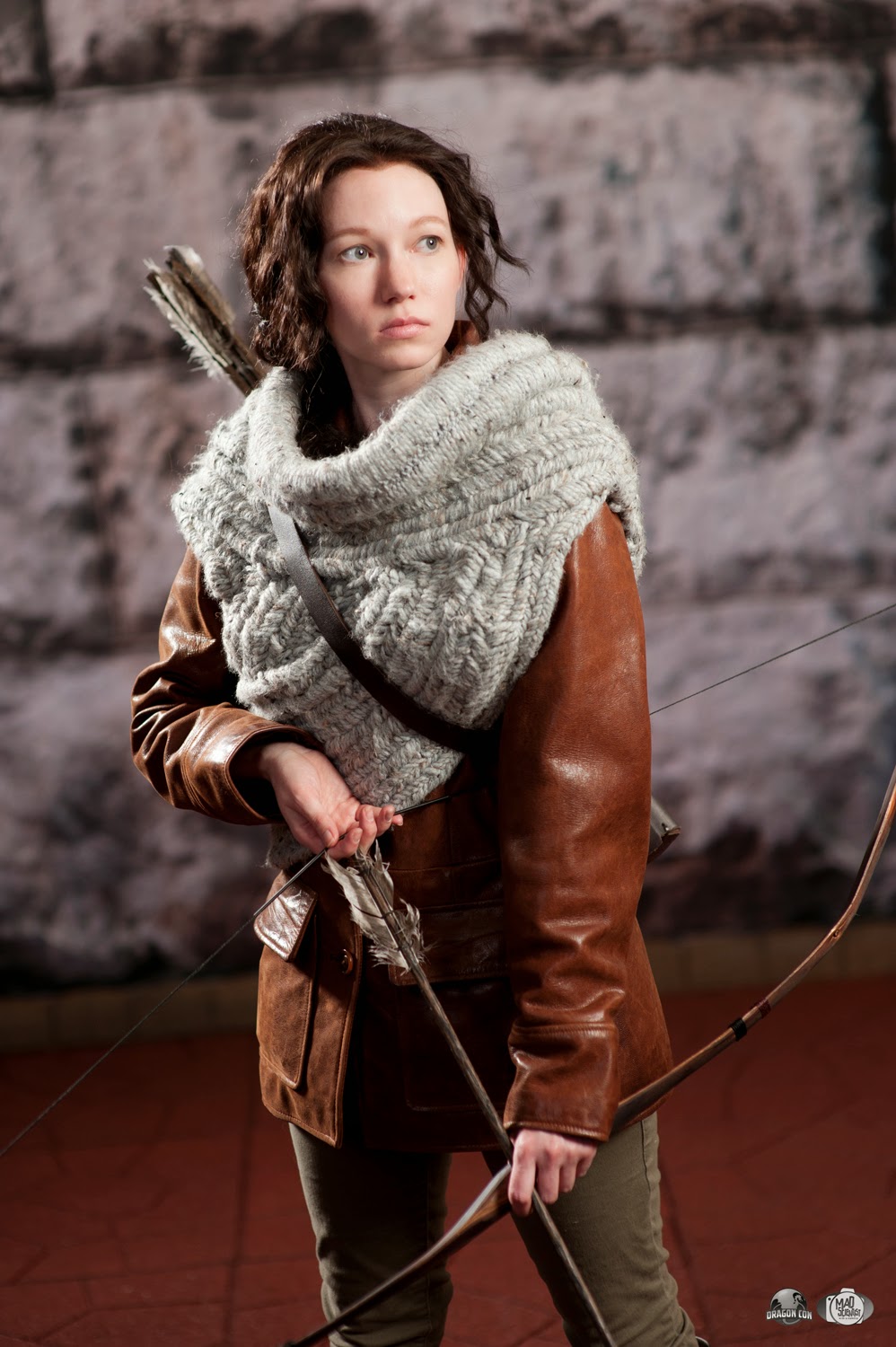 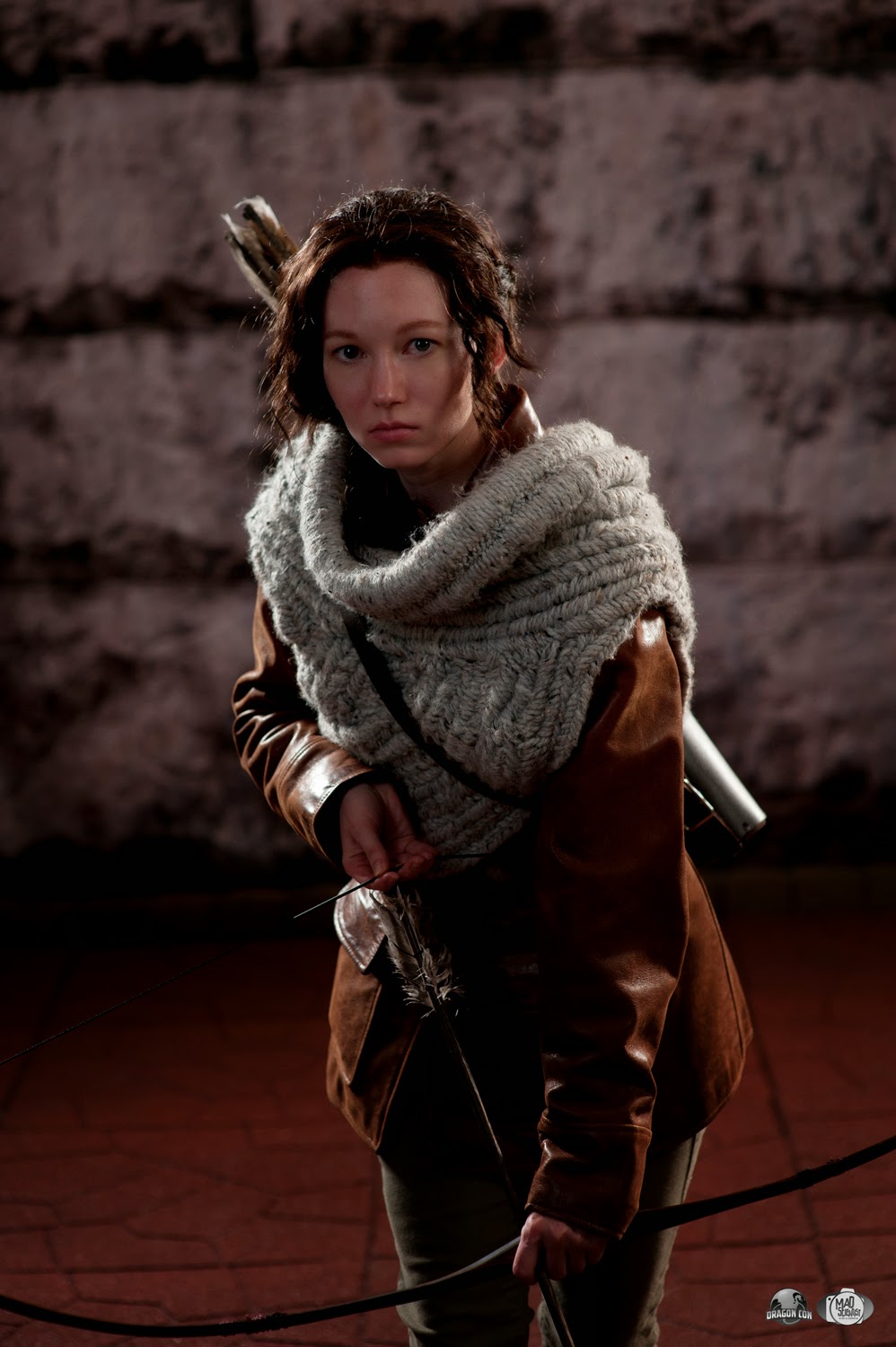 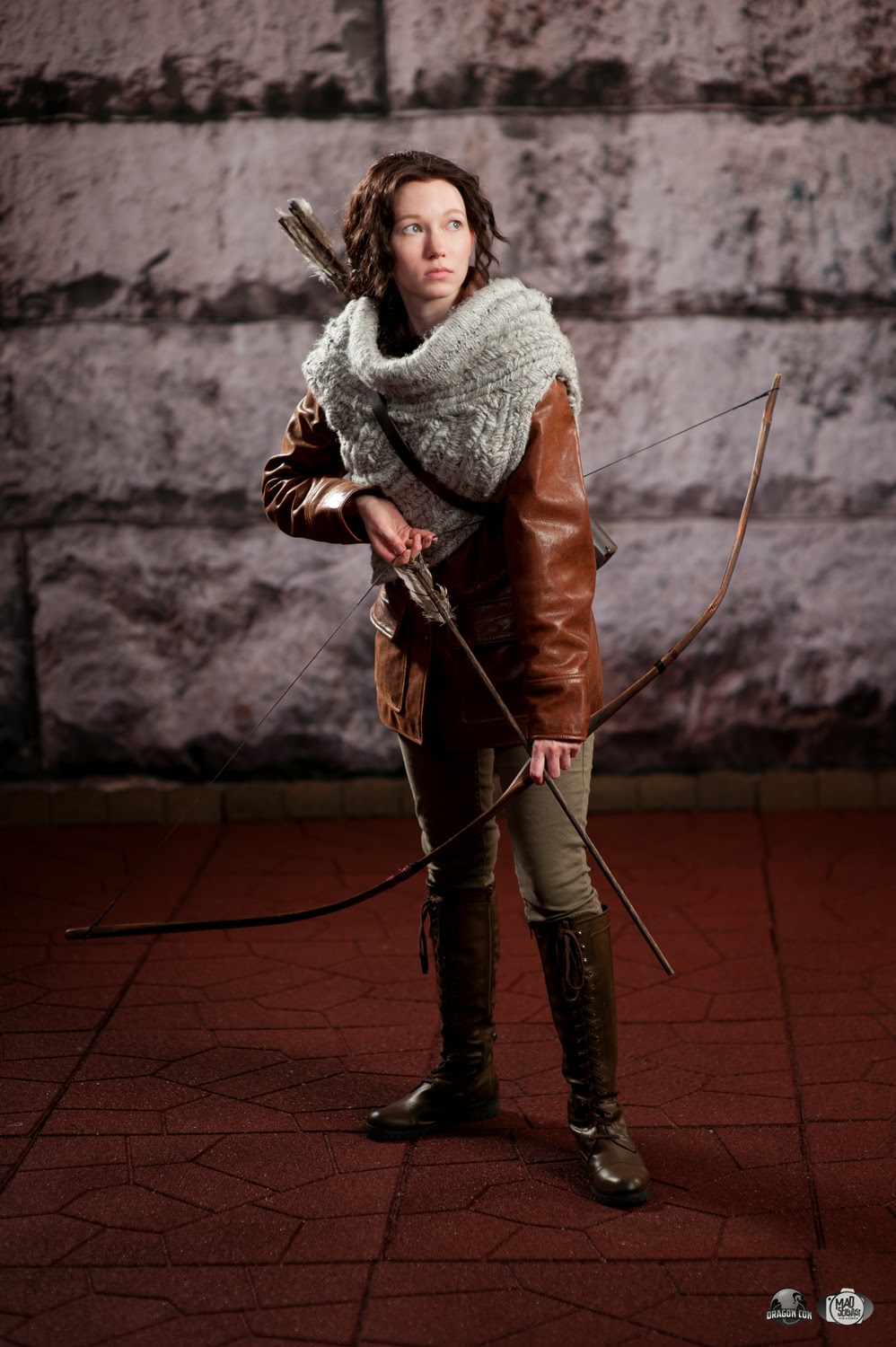 I just got back from Dragon*Con 2014 and it was a BLAST. I actually got to hang out on Thursday night this year, and I ran into so many people! Usually I search all con and only ran into a few, I think there were very few people I missed.

This year was a little unexpected for me, I usually only bring 4-5 costumes, this year I brought 8, some of them were old, or old with upgrades. I've actually taken a little break the last year or so from doing one big elaborate costume to doing a whole bunch of smaller ones, and though it felt so... wrong to not have a big show-stopper piece that I could enter in the big costume contest, I now feel I have enough in my costume closet that I have plenty of things I want to re-wear or use for group costuming when the opportunity comes up. I've also had the opportunity to have some older costumes photographed that I've never been able to properly share. I love bringing my pieces for Bryan Humphrey to photograph, he makes me look so good XD He is the Mad Scientist with a Camera

The first piece I'm going to share is an upgrade to an old costume. And I mean old. It's also my most worn costume. I made my Hogwarts Robes back in college, 6-7 years ago, when I first started learning how to properly pattern. It took months of studying and several drafts to make my shirt, skirt, and robe, and it's the only costume that old that I'm still proud enough of to wear. I picked Ravenclaw as my house (before it was cool, back in the day everyone only did Gryffindor or Slytherin) but didn't pick a character because I didn't believe I looked like anyone. This year, I decided to try something new and pick a character. I decided on Luna because, between her and Ginny, I already had Ravenclaw robes. I added an Arda wig which I made smaller in the cap. I'd like to add a lacefront so it looks better at the hairline. I ordered her replica wand from the Noble Collection, made her Butterbeer cork necklace, and found some spectraspecs in the vendor's hall which I wore to cover my glasses.

Out of all the costumes I wore all weekend, Luna was the only one that seemed to get stopped for pictures a lot. It felt so silly, after spending all this time and effort on other things, only to get such a gleeful reaction to an old costume upgrade. So here's the result. All pictures are by Bryan Humphrey. 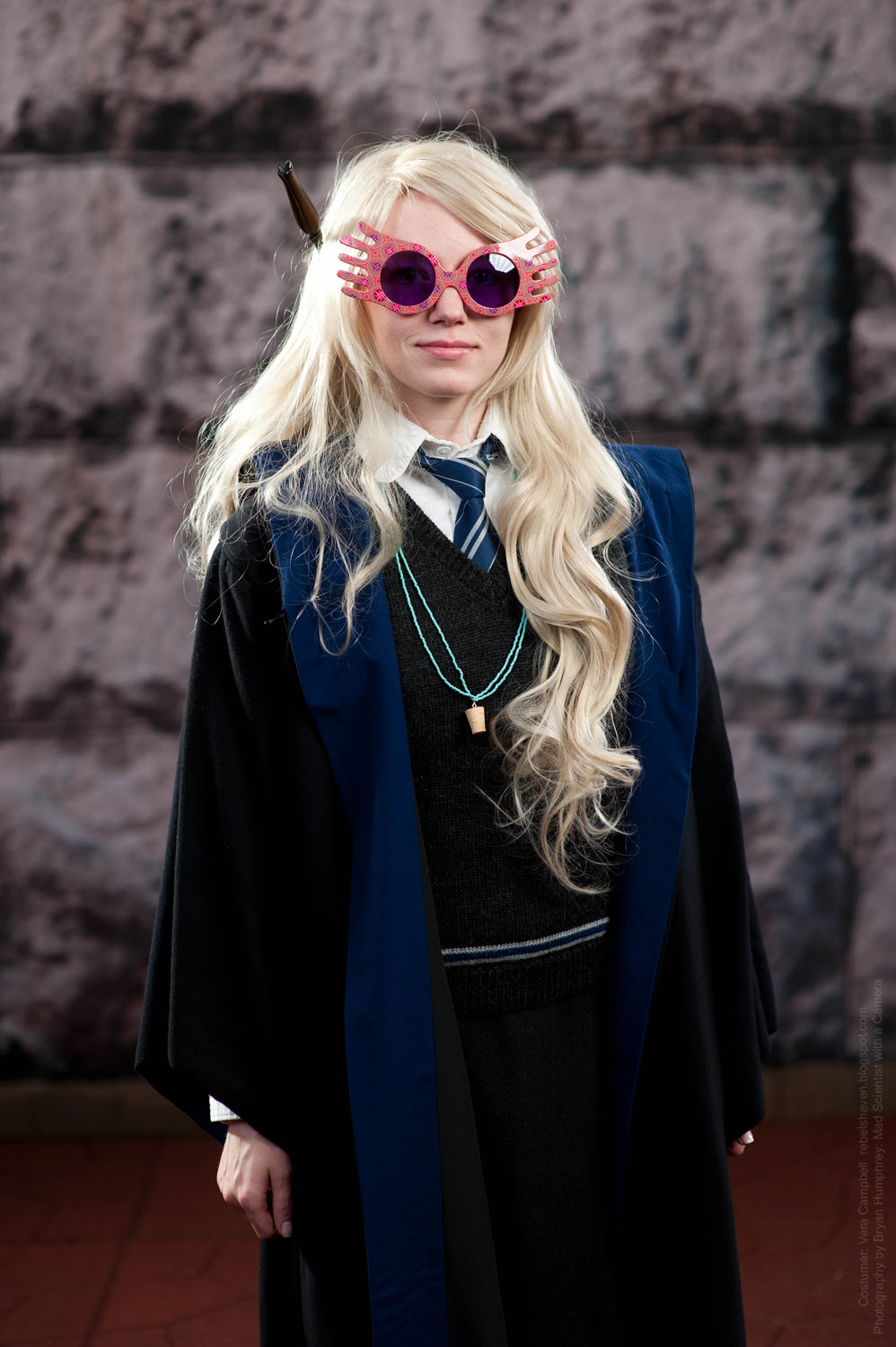 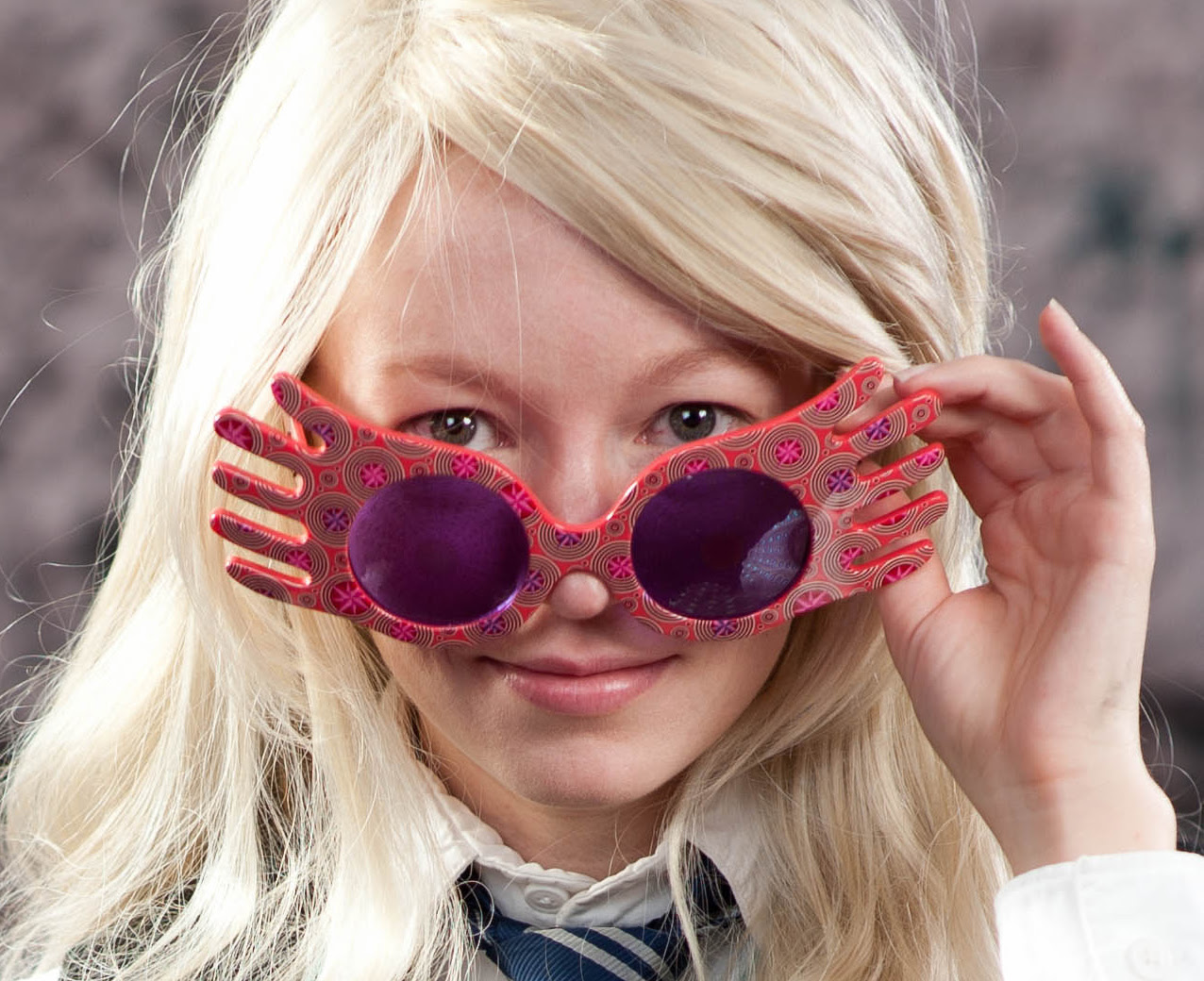 Posted by Verdaera at 9:57 PM No comments: