So, I've started watching Defiance, mostly because I live in St. Louis and *gasp!* someone actually set a show here. It's not filmed here, mind you, and due to war and alien terraforming, doesn't even look like St. Louis other than the Arch. If only we had mountains and weird giant purple flowers. Oh well. It's a fun sci-fi show, I wish they'd knock off with some of the adult-themed crap, but otherwise good stories and costumes.

I decided I wanted to do Irisa, an alien called an Irathient. I was sort of just toying with the idea until I just kept walking into some of the harder to find items thanks to luck and some friends. Since I stumbled onto the screen accurate fabric while shopping in Chicago, I started with the shirt. It's called a "Missoni-style knit", I don't have the color name, but it's a real interesting fabric. 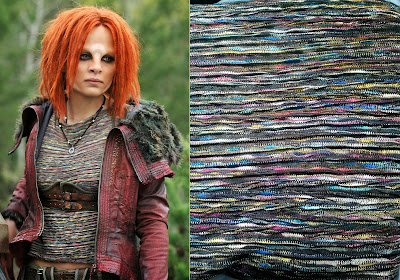 It was a pretty simple build, just took a knit shirt that fit similar and drafted a quick pattern from it. There are no hems, those were left raw, I basically just sewed and serged it. Then I chopped some holes in, trying to keep them where they were on her shirt. I still have to fray out the holes some more and weather it a bit, but here's a crappy messy-sewing-room-mirror selfie 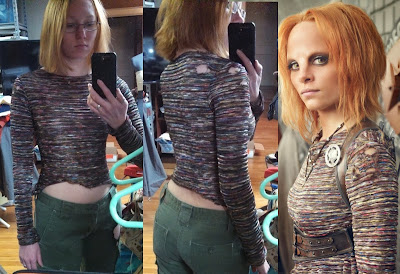 Not using the pants I'm wearing in the picture, those are from my Arena Katniss. My goal is to have this completed by April for St. Louis Comic Con. I might wait on the jacket since if I'm wearing it, the cool knife harness won't be showing :)
Posted by Verdaera at 7:34 PM 3 comments: