I thought I'd do a write-up since I think the way this pattern came together was interesting and could be used in other applications...

I started by draping the top of the chemise flat, with the idea that it would be smocked, but I patterned it flat. I drew in where the neck would end, where the smocking would be, and then where the flat shoulder piece would be... I knew I didn't want the fullness created by the smocking to be on the shoulder that would be cover with the bodice, but I DID want the fullness in the body because I am so skinny, I wanted to add a bit of bulk to my body to make myself a more believable hobbit size. I didn't take a picture of the flat pattern, but here is the shoulder pattern so you can see what I'm talking about... 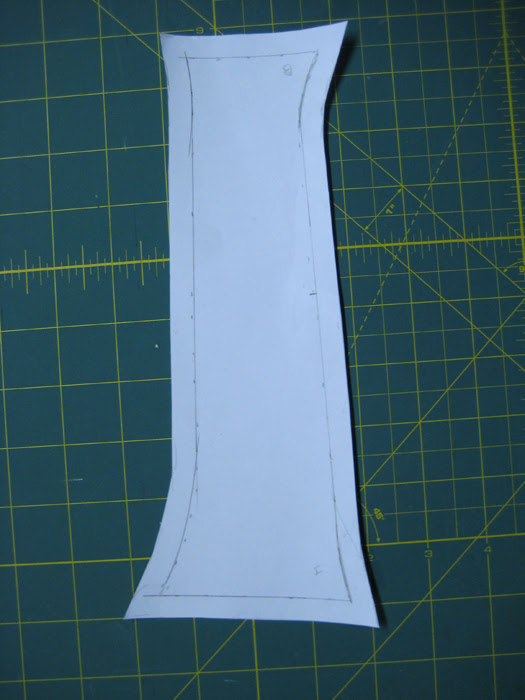 Now for some reason I thought I'd have to take the pattern of the neckline shape and slash and spread it three times it's size to get the smocked size until I did a sample and realized I could make the smocking do a gentle curve with no problem. So, I took a measurement of the neckline and multiplied by three and basically made a tube of my fabric. I used raw silk, which has a very pretty selvage edge, so I used the selvage edge for the ruffle on the neckline. Otherwise it would have to be roll-hemmed. I measured down from my selvage to where I wanted the smocking to start (I wanted a 3/4" band) and used 1/8" TIGER TAPE to mark my smocking lines. Tiger tape is this great thin masking tape with a black mark every 1/8". It can be found at quilting stores or ordered online. To smock, you need at least two rows of even gathering stitches to created the even rows for smocking (or cartridge pleating, for that matter). I pleated the top of the tube, and look how nice it makes a neckline curve when draped: 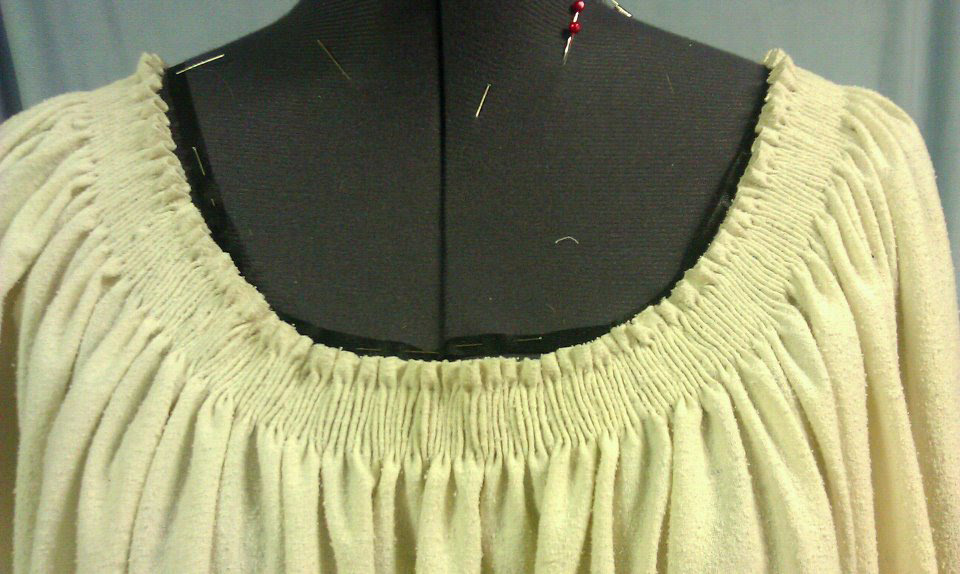 After this, I took advantage of the pattern I had made and made a facing with the neckline shape and stitched it in behind the smocking to hold the curve I wanted. Then, I did the smocking work. Since the other examples of hobbit smocking I've seen were same color and simple, I chose a shade slightly darker than my silk, and added one ply of a green to tie in with the skirt. I chose a smocking stitch that would be elastic since I was going to use it on the sleeves, and I did a double chevron design. It's pretty simple, but is a really pretty effect. The color is off, but here's a close-up: 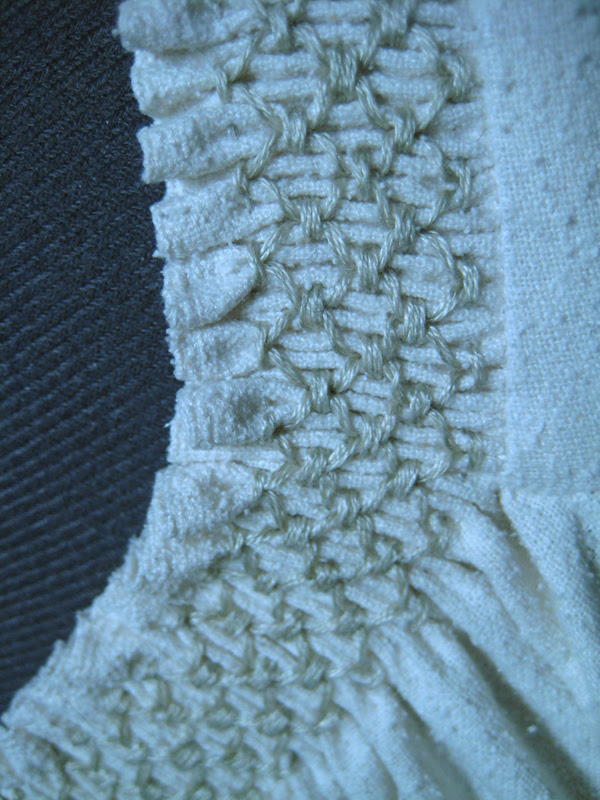 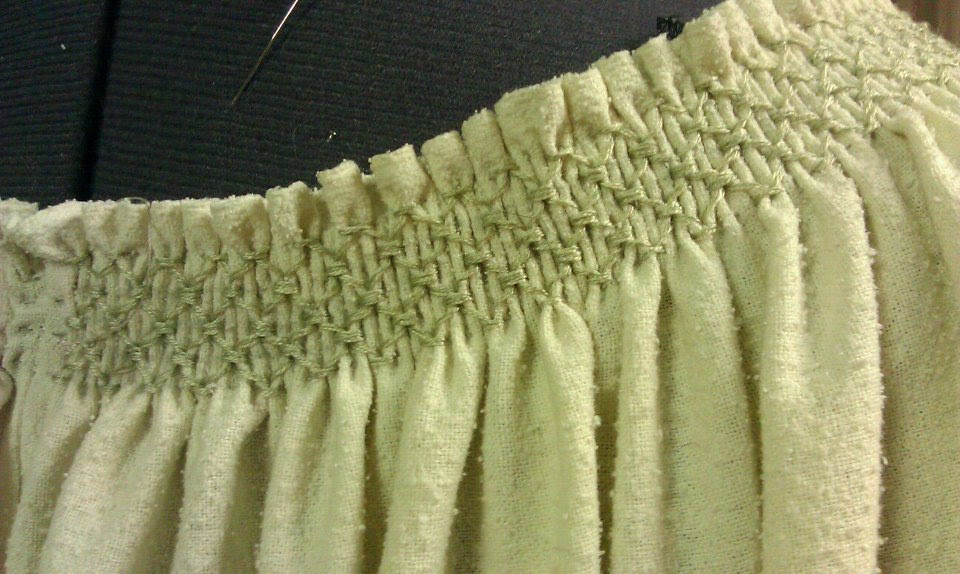 Now what I did was marked the top of the shoulder on the smocking, and cut out my shoulder pieces. I stitched the shoulder where it attaches to the smocked neck band and stopped at my seam allowance at the bottom. Then I cut the bodice along the seam line underneath the shoulder piece. Now, because I wanted fullness in the body I chose not to seam the sides at all, but it's possible to seam the sides to get rid of bulk at this point. I put in a gathering stitch at the top of the body to attach to the shoulder piece, and any excess I had left under the arm got controlled with a box pleat. Hopefully this picture explains a little better what I did here: 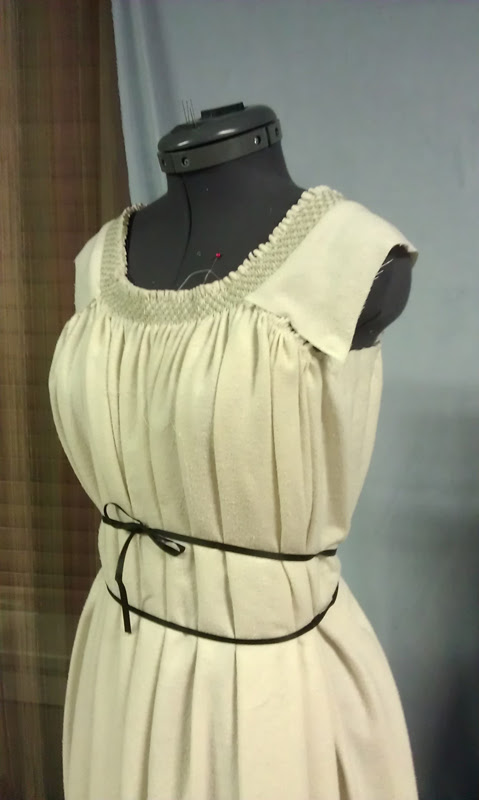 I also shaped the armhole at this point. The sleeves were a similar deal, I made the sleeve 3x the width around my arm above the elbox and used the selvage for the ruffle edge. I wanted a larger ruffle for the cuff so I simply smocked higher up, and I only did a 1/2" wide smocking band because I felt 3/4" would be too much. I also did a mock up to figure out the blousing to figure out the height of the sleeve. I didn't shape the sleeve, I simply marked the center, and did a double pleated row in the center top part of the sleeve. The difference with the smocking on this one was because I wanted it elastic, when I tightened my gathering stitches, I slipped the sleeve on my arm and gathered it to size. Then when I pulled it off, I pulled my threads another inch tighter and tied it off, then did my smocking. Now, this smocking stitch, the double chevron, is an elastic stitch, meaning this smocking will stretch. However, I felt it didn't have the tension to actually hold it up my arm and might get stretched out. Before I removed the gathering threads, I ran elastic thread through the top and bottom of the band. I just used Gutermann elastic thread. You can take a needle (and you can't thread it without a needle threader) and just run it through the fabric on the back side. Pull it taught, but not enough to gather it tighter. Then remove the gathering threads. 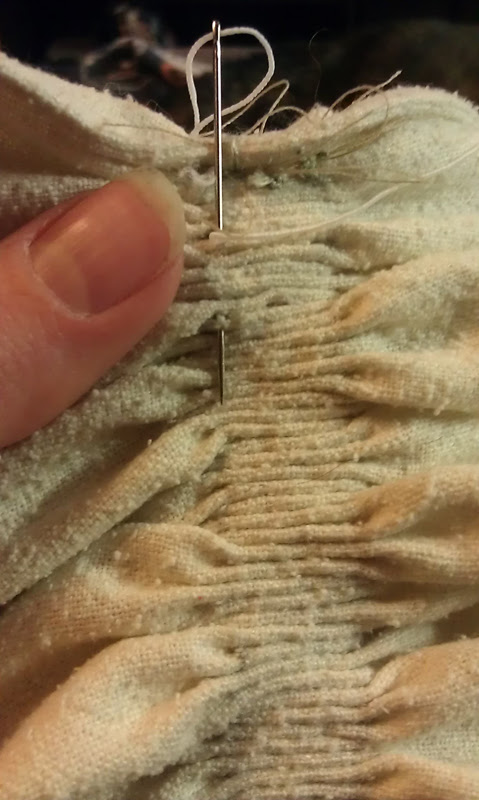 Then, since I couldn't figure out how to pattern the sleeve when I knew I'd be smocking it, I sort of just drape-fitted it in, and it worked just fine. So there you have it, curved, smocked neckline and elastic cuff smocked sleeve. I hope you all found this informative, because I just made this all up as I went along, I'm not sure what the 'proper' method is for any of this ;) 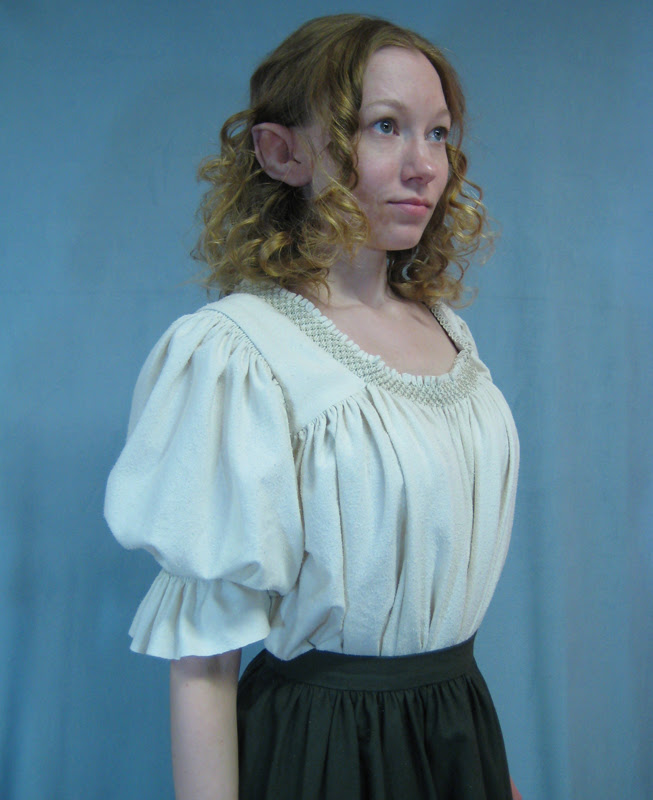