I know, I know, I have to post White Witch Build thread info. Hopefully I'll get to it soon, been a bit busy getting ready to move! I'm really excited about it because, while it's still in town, it'll be away from the major road/bar neighborhood I'm in right now. My sewing room will be smaller, but I won't have to share it and am moving storage elsewhere so it'll house mostly my sewing, cutting table and dress forms. We'll see how that goes!

My current project is Hoth Leia from Empire Strikes Back. 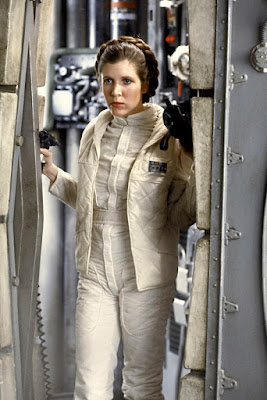 I had started this last year, but got frustrated with patterning issues and was distracted by prettier, shinier things and put it away. Needless to say, with The Force Awakens coming up in December, I need a cold-weather costume. I have Rebel Legion troops at the release, the Symphony, and the Blues Hockey game, so my interest is renewed. I had been researching for awhile and besides my own notes and Rebel Legion, I use Padawan's Guide as a resource. I started with the vintage Kwik-Sew Pattern 2624 that was mentioned as being used by another costumer. 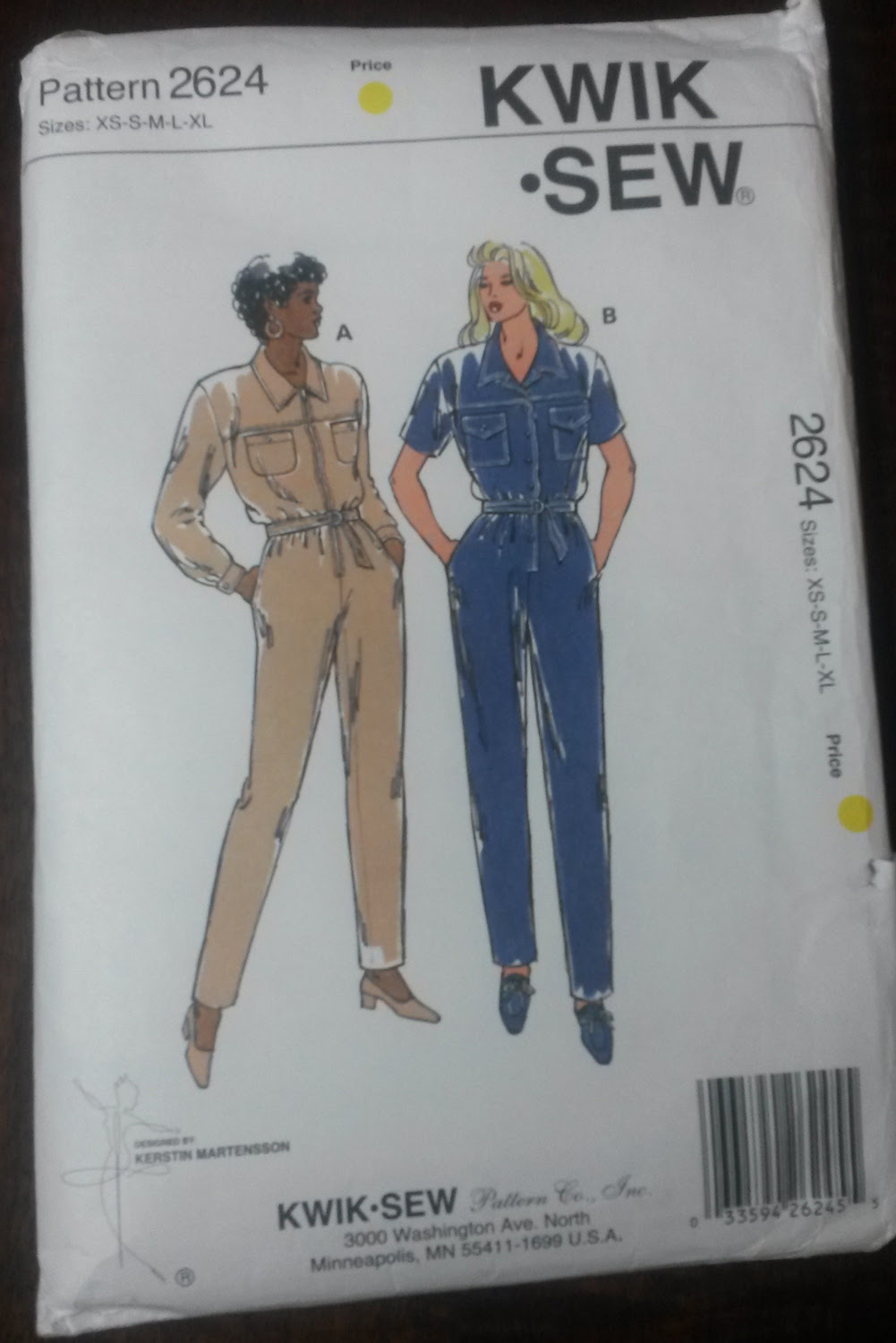 Looking at the picture, it didn't look grossly oversized and had similar seam lines except for the princess seams. For once, there were measurements on the envelope that were smaller than I was (I'm the size Carrie Fisher was back then, perhaps with a bigger bum :p ) Looking at the pattern pieces, I cut out the XS anyway because it all looked larged.

Honestly, I am not sure I can recommend this pattern. I thought I'd save myself the hassle of drafting it from scratch and would just be altering. It might have been less work to draft this from scratch!

I had to add the princess seams, I had to take maybe 3 inches off of all sides to make it remotely fit, shorten the crap out of the bodice, restructured the armscye's, and wanted to rip my hair out trying to resolve crotch fit issues. I must have tweaked that thing 20 times before ripping it out and "draping" it, and finding out the rise wasn't right at ALL. It honestly might be better to frankenstein something more fitted together.


USING PHOTOSHOP AS A TOOL

When I recreate a piece, I basically save and capture every picture I can find from every angle I can find it in, and drape and pattern my piece based on my observations and notes. I usually spend months drooling over/obsessing over all the details well before I even start the project. The things I note when I am studying are:

Since I usually do movie costume recreations, I'll go through and capture pictures, especially during movement so I can see all the angles. I watch every special feature I can get my hands on as well as B-Roll footage that comes out on the net. Exhibit pictures are my best friend (since they rarely have these exhibits in my neck of the woods). I built my Alice costume before the movie came out on Exhibit pics alone.

Once I have my mock-up built, I like to try it on and take pictures of myself in it recreating poses from some of the best reference pictures I have. It's a good idea to marker in your seam lines so they are visible when working with the pictures. Simply speaking, you can use any photo editing program that lets you work in layers. I have an older version of Photoshop, CS2. 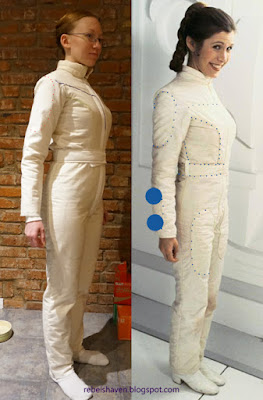 Here's an example. The angle could have been better on the camera, but I'm camera shy and had someone helping me. Usually, I set up a tripod and take dozens of pictures until I get the right angle and pose. The blue ribbon you see on my chest was a proposed seam adjustment I knew I had to make. Since this is a lot of white on white, I copied my reference picture (never work on the original!) and added dots to all the lines I was trying to match up. I did the same on the picture of my muslin. (The large round circles you see on Leia's arm were me testing a theory that her quilted patches were perfectly circular on the curves.)

Next, I layered the two images together. 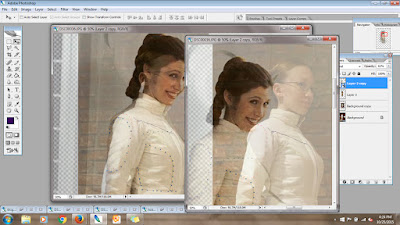 My Leia reference picture, I changed the opacity of the layer so I could see through her but still see her shape. (By 'change opacity', I mean to change how solid or see-through the image is, which in photoshop can be done in the layers menu). I 'Transformed' this layer to be my size and shape. It is important to transform the layer, not change the size of the overall image. To transform, select the layer you want, and select Transform from the Edit menu, or simply hit "CTRL+T". Boxes will appear around the selected image. You may have to zoom out. You will want to hold down the shift key and drag the box from a corner. Holding shift will keep your image to scale. Adjust your reference image until it is your same height. Look at the face, the facial features should approximately line up. Also try and line up things like shoulder, waist, etc.

Now, I lucked out in that I am basically the same build as Carrie Fisher; she's only an inch taller than me. More often then not, we are not the same proportions as the actors who play our characters. All that matters in recreation costuming is that proportionally, your lines match up. I have seen many good costumes not reach their potential because the seam and hem lines just didn't hit where they should. For instance, the quilted squares on Leia's vest may be 3" square on her, but on someone taller they may need to be 3.25" to have the same number of squares in the vest. The final measurements don't matter so long as everything is proportional.

How do we fix it? I don't have pictures of this part, but basically you will resize your reference layer to match you (not the other way around) to see where the lines hit on you. When you held shift while transforming, it kept the image to scale. If the reference is taller, shorter, skinnier or up a size or two from you, you can skew the reference layer whichever direction it needs to go to make it match. If you run into a problem where, say, you are more short-waisted then them or have longer legs, you can marquee select part of your reference layer (that is the tool that looks like a box with dotted lines) and drag it over part of the image, say, to the waist, and CUT the selected piece (CTRL + X). Create a new layer and PASTE (CTRL + V). Now you have two separate halves which you can stretch and shrink independently until you get something more proportional to you.

Based on this, I was able to make the necessary  adjustments to my seam lines until they lined up more closely with hers, and I will have a more accurate product for it.

Another use for photoshop: 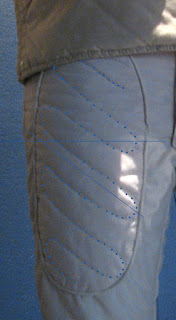 Creating an image like this really helps for reference when designing your pattern. You can brighten and sharpen images until you can see the details you want. I drew a few lines on here and used my protractor (holding it on my screen, though there's probably a more technical way to do it) to get the angle these stitches go. You can even go so far as to make a layer with a 1" grid, scale your reference photo to the approximate size you think you need, and print off a reference to start your pattern with! (Be sure to erase anything you don't need to conserve ink!) Doing this saved a lot of time and guesswork when starting the pattern for these quilted pads.

I hope this info proves useful :)