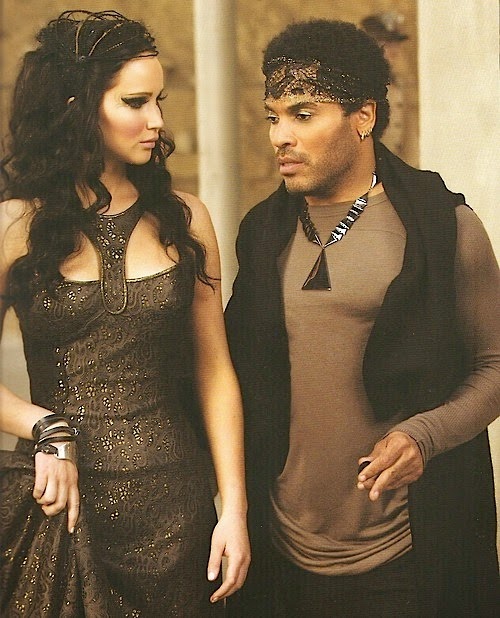 That's right, I'm adding to my Katniss collection. I absolutely love this dress from Catching Fire, and I'm glad that it was custom made, as most of her wardrobe were designer items I can't afford. I don't have many good pictures of the whole dress standing, and you never see it in the movie except when the chariot first pulls into the Tribute Parade. I have a flickr album for my Katniss research, here's a link to the parade research album.  Click on for the start of my build.


This dress, we've determined, is a laser-cut leather over a metallic gold foundation. It's short in the front and trains in the back. She also wears a bracelet from darklandsberlin.com and some demon shoes (seriously, there's no way to talk in those). I forget who makes them, but they are uber expensive and I don't think Jennifer Lawrence was comfortable in them. The only shot of her in them is in the special features, and she's shifting her weight as if her feet hurt her. All further film shots show her in wedge sneakers. You never see her boots in the movie. 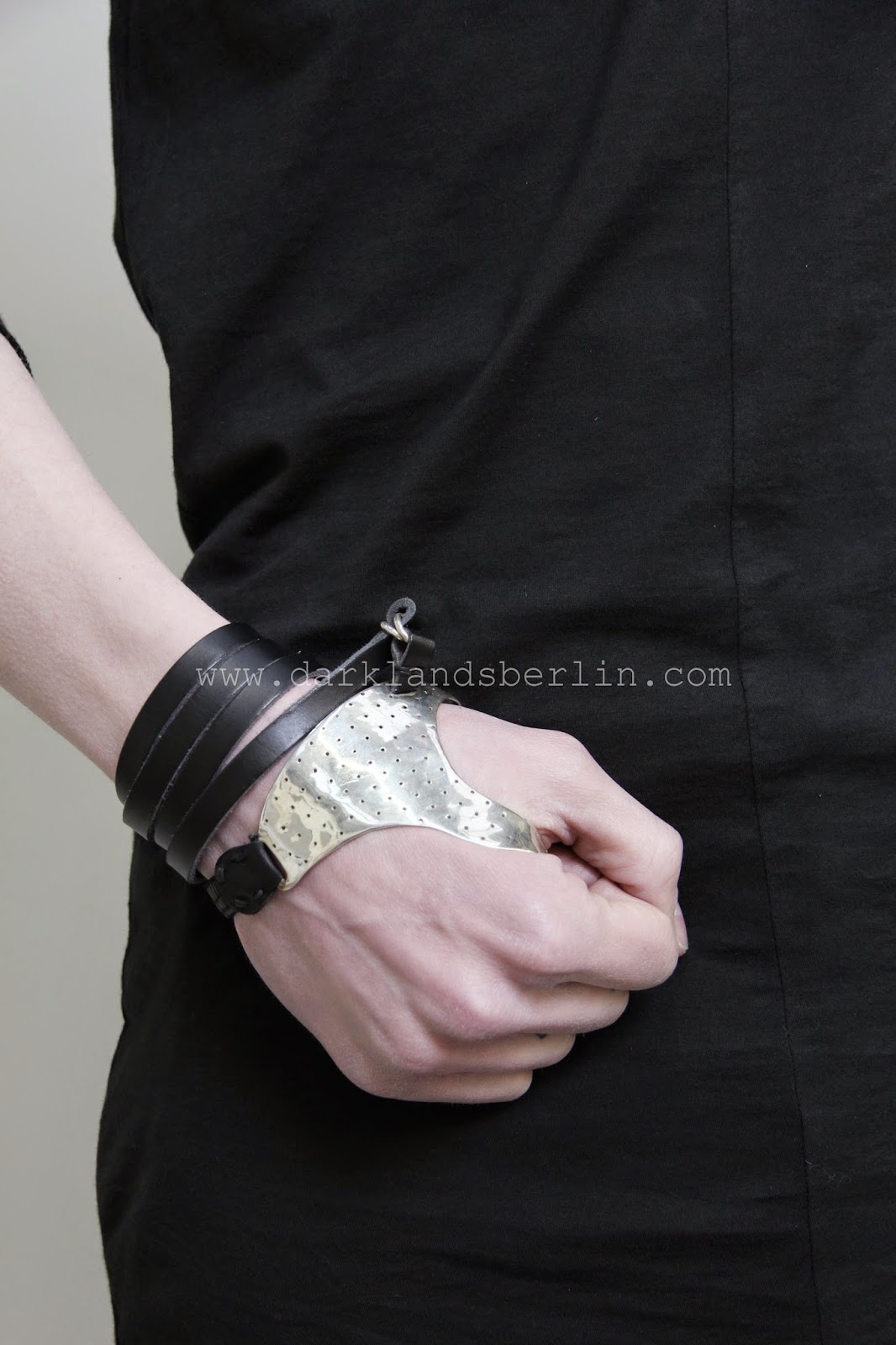 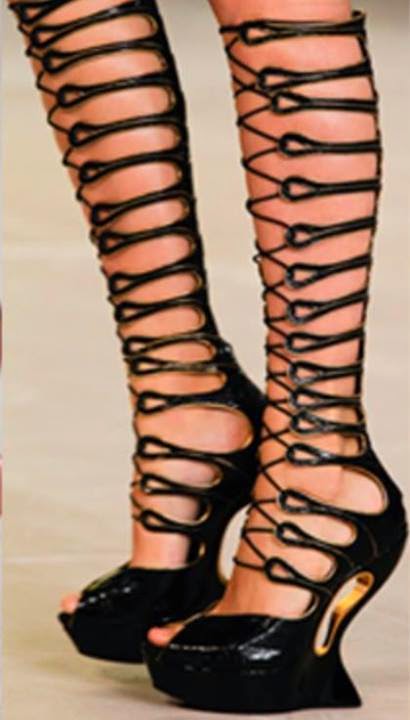 Since these both are designer items I can't afford, I'm going to try making them, and finding some gladiator-style shoes. In the mean time, I have the base dress done. Trish Summerville, the costume designer, released a Capitol-inspired collection that included something similar to the parade dress. I used the seamlines from this to come up with the pattern for the base dress. Since the best, non-cheap-looking metallic gold I could find was a very thin stretch material, I wanted to flat-line it to a cotton fabric. I went with a thin twill so it would have a sturdy base and nice drape. The top has built-in cups, so I basically deconstructed a bra and built it in. I flattened the front of the skirt after I took this picture, sorry I didn't take a better one! 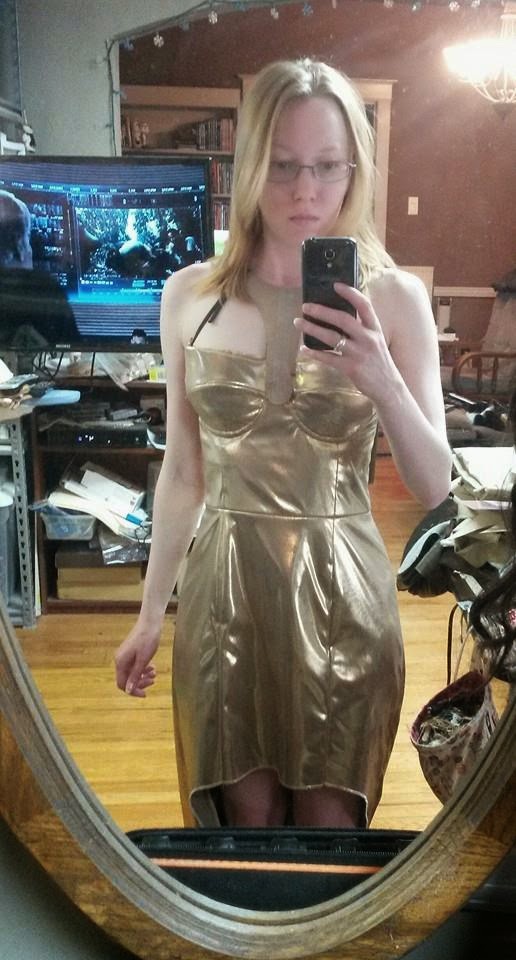 I still want to fiddle with the collar shape, but that doesn't get attached until the leather is layed on.
Now this leather I admit was my tax-refund splurge for the year. Usually I treat myself to a higher-priced costume piece or materials during refund time than I normally would through the year, and that was it. It's gorgeous stuff, and I bought 4 hides of it. Thankfully, I'm skinny and short, I can get away with using less fabric. Looking at Jennifer Lawrence's dress, there are no seam lines in the leather. Since leather doesn't fray, I believe the base dress was built first, and the leather applied on top, trimmed along motifs and carefully worked around the curves. I put my base dress on my dummy, and put some temp. spray adhesive on the back of my leather and stuck it down along the flat, center-front parts of the dress and carefully pinned it through the open parts to hold it in place. I started tacking it by taking matching thread and stitching through part of the floral motif around the dress to hopefully keep it controlled. I've got the front part stitched out and haven't tackled the cups yet, which will be... interesting. 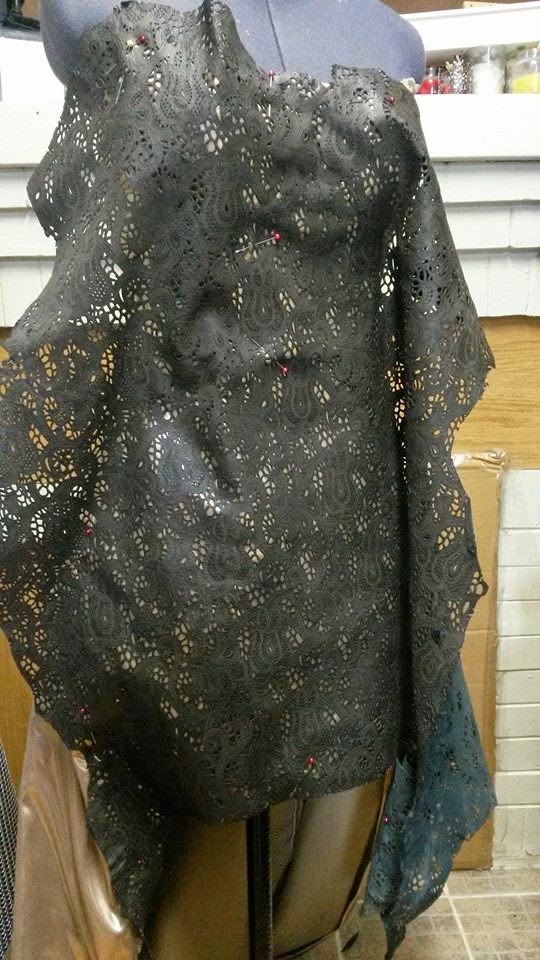 I've got until the end of August to finish this, but I think it'll be done before that. I scrubbed plans for the big Katniss Wedding Dress for Dragon*Con as I don't think I have time or funds to finish it before D*C, so this is one of 4 new costumes for this D*C, the rest of which require a little finishing and prop work, but otherwise I'm in good shape for D*C. I might get insane and add a simple one into the mix, but this year I hope to not be sewing everything last minute. The other 3 costumes are pretty much in a wearable state. Will update you all on this project as I go, right now it's all tedious hand sewing.